The importance of intestinal fermentation by the microbiota in human health is now indisputable. One particular area emerging as a hallmark of intestinal and overall health is intestinal barrier function. (Odenwald & Turner 2017) The intestinal barrier has the dual task of letting nutrients in while keeping the microbes and the remaining contents of the intestinal tract out. The following infographic from Gut Microbiota for Health does an excellent job of explaining many of the basic concepts of why a healthy gut barrier is essential.

Resistant starch, an insoluble dietary fiber, offers strong promise for maintaining the integrity of the gut barrier. Its fermentation in the gut produces short-chain fatty acids – primarily acetate, propionate and butyrate.  Several studies have reported that resistant starch produces the most butyrate compared to other dietary fibers. (Cummings 2001, Bourassa 2016, Tsitko 2019)  For instance, the Cummings 2001 paper reported that resistant starch produced twice as much butyrate compared to inulin and FOS.

Butyrate is recognized as the workhorse driving gut barrier integrity. (Bach Knudsen 2018) It modulates cellular proliferation, differentiation and apoptosis of colon cells. Its benefits in maintaining the gut barrier are driven by multiple mechanisms. First, butyrate is the primary food for colon cells, which must get their food from the intestinal tract and not the bloodstream. (Wachterschauser 2000, Thibault 2009)  If cells do not get enough butyrate, gaps and leaks between the epithelial cells can develop. Secondly, butyrate regulates gene expression as a histone deacetylase (HDAC) inhibitor and a G protein-coupled receptor (GPCR) activator, among others (Leonel 2012, Chang 2014). These pathways regulate numerous genes controlling inflammation, immunity, appetite and energy balance and are believed responsible for butyrate’s anti-carcinogenic, anti-inflammatory and neuroprotective benefits. In addition to the papers already cited, a 2019 review focusing on butyrate was published in Critical Reviews in Food Science and Nutrition. 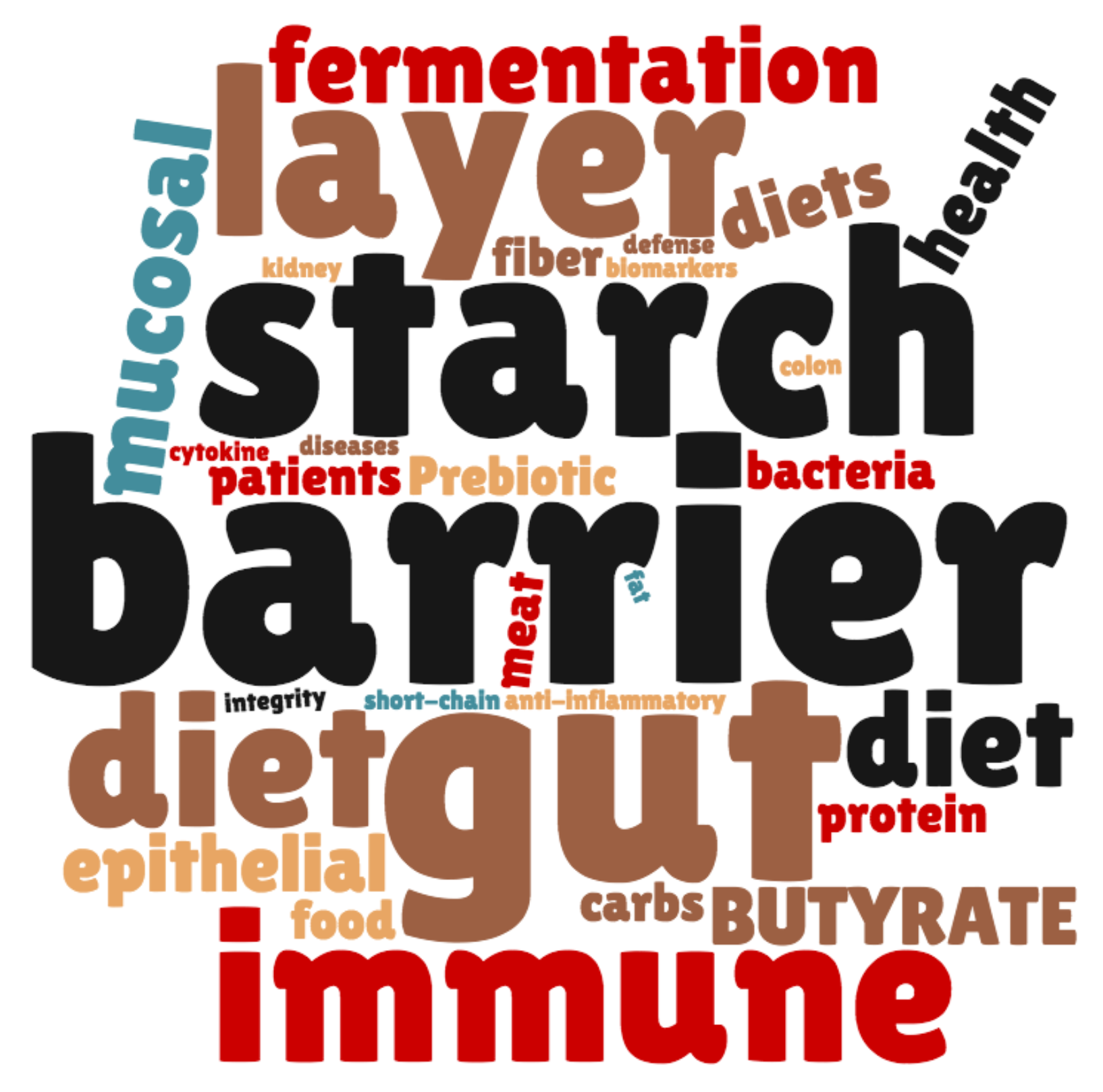 This post will focus on resistant starch’s impact on the gut barrier. As shown in the above infographic, the gut barrier contains three layers – a mucus layer, the intestinal epithelial barrier itself and the mucosal immune system.

The mucus layer is the first layer of defense in the gut barrier – it is a viscous layer created from glycoproteins and mucins that are secreted by intestinal goblet cells. It functions as a lubricant as well as a protective barrier for the epithelial cells. The outer layer of the mucus is populated by many types of bacteria while the dense, inner layer in largely bacteria-free in healthy individuals. This dense inner layer also contains antimicrobial peptides and secretory antibodies that help protect the epithelial layer from pathogens (Camilleri 2019).

If the intestinal bacteria are under-fed, they will consume the mucus as food. Several studies have demonstrated that fiber-free diets result in the thinnest mucus layers within the intestinal tract. For instance, Dr. Eric Martens and his colleagues at the University of Michigan Medical School demonstrated that in a fiber-free diet eroded the mucus barrier and allowed pathogens easier access to the colon cells of mice, resulting in lethal colitis (Desai 2016).

Dr. Michael Conlon and his CSIRO colleagues in Australia have also shown in several animal studies that high protein diets thinned the mucus layer. The dairy protein casein was more damaging than red meat or soy proteins (Toden BJN 2007) and red meat was more damaging than white meat (O’Callaghan 2012). In these studies, dietary resistant corn starch protected the mucus layer and prevented the damage caused by the high protein diets. The degree of protection directly correlated with the butyrate concentration, a short-chain fatty acid produced by the microbial fermentation of resistant starch (Toden CBT 2007, Topping 2008).

It can be concluded that prebiotics is not only about feeding the microbiota and supporting the beneficial bacteria – it is also about providing sufficient food for the microbiota so that they do not consume the mucus layer, which degrades the gut barrier.

The second layer of defense for the gut barrier is the single layer of colon epithelial cells.

A 2019 animal study by Dr. Martin Kriegel and his colleagues at Yale University (Zegarra-Ruiz 2019) demonstrated that probiotics translocated across the leaky gut (causing inflammation and death), but resistant corn starch helped to heal the leaky gut and prevented the inflammation, significantly reducing mortality. These researchers first introduced lupus in genetically prone mice, then suppressed the microbiota using antibiotics, which improved the autoimmune condition. They then identified a single bacterium, Lactobacillus reuteri, in the gut of the disease-prone mice that triggered the immune response leading to the disease and discovered that the animals had an impaired gut epithelium. In short, the bacteria were able to cross through a leaky gut barrier, which triggered inflammation and interferon signaling. The bacteria were found in the lymph nodes, the liver and the spleen tissues. Only 25% of the animals survived after 24 weeks. It is important that Lactobacilus reuteri is also found at increased levels in the feces of lupus patients compared to healthy people.

When resistant starch was included in their diet, the Lactobacillus was reduced, the gaps in the intestinal barrier were healed and the bacteria going through the gut barrier was significantly reduced. The survival jumped to about 60% after 24 weeks. Further research demonstrated that short-chain fatty acids, in particular butyrate, inhibited L. reuteri in a dose-dependent manner. They concluded: “Resistant starch decreased the abundance of L. reuteri, gut leakiness, type I IFN and proinflammatory responses, pDC (plasmacytoid dendritic cells) infiltrations, and organ pathology, thereby preventing the development of systemic autoimmunity and decreasing mortality.”

It is very difficult to prove the preservation of a healthy gut barrier in healthy people.  One new 2020 clinical study (Yoshifuji  2020) utilized a population with leukemia and leukemia-related syndromes, whose treatment included antibiotics known to cause intestinal dysbiosis. They demonstrated that a resistant starch mixture maintained gut microbial diversity, preserved butyrate-producing bacterial populations, mitigated mucosal injury, and decreased incidences of acute graft-verus-host disease (aGVHD) in 49 individuals undergoing hematopoietic stem cell transplantation. The participants consumed a mixture containing 8 g of resistant corn starch, 3 g of glutamine, 5 g polydextrose and 1.45 g lactosucrose per day from the start of pretransplantation conditioning regimen until 28 days after the transplantation. The treatment regimen includes an antibiotic treatment, which disrupts the gut microbiota and can lead to translocation of bacterial components such as lipopolysaccharides. This translocation through the gut barrier is believed to be a driver for the development of aGVHD. The study concluded that the prebiotic regimen may be an effective strategy for preventing aGVHD in allo-HSCT, thereby improving treatment outcomes and the clinical utility of stem cell transplantation approaches.

The implications of these studies are HUGE – resistant starch helps to heal the gut barrier through its production of butyrate within the gut.

The third and final defense of the intestinal barrier is the mucosal immune system, located deep within the intestinal epithelium. It is also known as the “gut associated lymphoid tissue” or GALT and contains up to 70% of the immune cells of the entire human body. (Pearson 2012). This system contains numerous immune cell populations, which manage pro-inflammatory cytokines (such as TNF-a and IL-6) and anti-inflammatory cytokines (such as IL-10 and TGF-b).

Several clinical studies have demonstrated resistant starch’s benefits in strengthening the mucosal immune system. Dr. Stephen O’Keefe and his colleagues from the University of Pittsburgh in the USA conducted a diet swap between South Africans consuming a traditional diet (high in resistant starch and low in fat) with African Americans consuming a Western-style diet (low in dietary fiber and high in fat). They switched the diets of these two populations for two weeks and demonstrated that resistant starch and removal of dietary fat improved butyrate levels, and reduced colonic mucosal inflammation and proliferation biomarkers of cancer risk (O’Keefe 2015). African Americans which switched to a high-fiber, low-fat diet for 2 weeks saw a significant increase in dietary fiber fermentation and butyrogenesis while Africans, switched to low-resistant starch, high-fat diet, experienced higher protein fermentation and reduced butyrogenesis as well as increased mucosal inflammation and biomarkers of cancer risk.

Animal studies have reported similar results. Dr. Maria Marco and her colleagues at the University of California at Davis in the USA found that resistant corn starch had a protective effect on the intestinal immune system of obese mice resistant starch fed a high fat diet (Barouei 2017). They concluded that the resistant starch stimulated intestinal immunity and endocrine-responses. In the ileum, RS consumption enhanced TLR2 and Reg3g gene expression. They also saw reduced concentrations of IL-17A, a proinflammatory cytokine associated with risk for obesity-related diseases.

Resistant starch’s production of butyrate is turning out to be critically important in maintaining a healthy gut and to maintaining the integrity of the gut barrier. Its ability to reduce intestinal inflammation is also beneficial.

Starch is one of the most abundant foods in the world and has been a staple in every diet known to man and animal. As our food is processed, however, the starch in our diets has become more easily digestible and contains much less resistant starch and dietary fiber. Historically, we have consumed 35-50 grams of resistant starch/day but this has reduced to only 5-6 grams/day with current diets. (Murphy 2008).

We need to restore resistant starch back into our diets. I am certain that research will continue to explore the specific mechanisms and pathways on how resistant starch improves the integrity of the gut barrier and reduces inflammation, but we do not have to wait.  Resistant starch is available as a prebiotic supplement, and is available in selective foods (intact whole grains, beans, green bananas, and cooked and cooled starches). Make it part of your diet today!