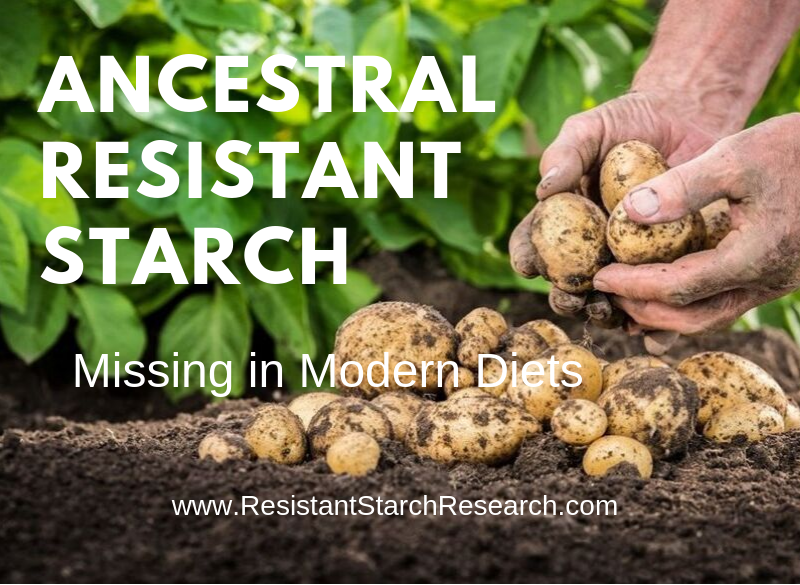 Starch has always been part of our food.  It was a major component in ancestral diets and it is still a major in today’s food. In fact, starch-based foods constitute the five largest food crops around the world: maize, wheat, rice and potatoes and bananas. Notwithstanding stories and claims by advocates of the Paleolithic and other “caveman” diets, people have always consumed starchy foods.

Historically, people ate 30-50 grams of resistant starch per day. Instead of an abundant quantity of hard-to-digest carbohydrates, most of today’s carbohydrates are high glycemic and easily digestible. This was actually a marketing pitch in the 1940’s – New Era Scientifically Processed Potato Chips advertised that they were “more readily digested”.

These marketing campaigned worked as people steadily moved to the convenience and ease of processed foods. Today, people consuming today’s Western-style diets typically consume only 3-8 grams of resistant starch per day. (Platel 1994, Brighenti 1998, Liljeberg 2002, Murphy 2008). Resistant starch intake in Chinese adults was calculated to be higher at 14.9 grams/day with cereal and tuber products contributing the most. (Chen 2010)

Over the centuries, our diet of slowly digestible and resistant starch became more and more digestible. Now, we are discovering the detrimental health consequences of this shift in our starch consumption.

There is an abundant amount of data supporting ancestral starch. The Neanderthals in France used tools to dig starchy roots out of the ground and regularly consumed these starchy foods approximately 125-250,000 years ago. (Hardy 2011). Food residues from Upper Paleolithic sites dated to 30,000 years ago show that the grinding of starchy roots and rhizomes into flours and foodstuffs was common practice.  (Jaminet, p. 11) Our hominid ancestors were eating savanna tubers, roots and corms – foods similar to our modern potato and taro. (Yeakel 2007)

Pacific islander foods included breadfruit, taro and sweet potatoes. (Thorburn 1987) Yams, a staple food in the South Pacific islands for thousands of years, were typically peeled, boiled and mashed, or dried and ground into a powder that could be cooked into a porridge. (Tedder 1974).

Natives of Mexico farmed corn as early as 5000 B.C., and shortly after, beans and squash. (Schenone 2003) The oldest known cobs of maize were discovered in Bat Cave, New Mexico and are believed to have laid there since 3600 B.C. Maize, beans and squash were planted together around 800 A.D. in what is now known as Illinois. These “Three Sister” crops provided surplus food that created an expanded population throughout the extended Mississippi River valley and tributaries, for hundreds of years. Their importance to American agriculture was commemorated on the 2009 Native American $1 coin.

Traditional African diets have long included a stiff porridge. This porridge was usually made with sorghum or millet prior to the sixteenth century when corn (maize) found its way from the Americas to Africa (Maize & Porridge). Today, maize porridge remains a staple in traditional African diets. It is known by many names, including nshima in Zambia, ubwali in Bemba, sadza in Zimbabwe and ncima in Mozambique.  Often, it is cooked in the morning and eaten throughout the day and is rich in retrograded resistant starch (RS Type 3).  A recent clinical study reported that traditional south African diets contain 28 grams/day of dietary fiber plus an estimated 38 grams of resistant starch/day through foods such as putu, a maize porridge. (O’Keefe 2015).

Wild potatoes originated in the Andes mountains of South America – they were domesticated and cultivated approximately 7,000-10,000 years ago and provided a principal energy source for the influential Inca civilization. Not only did the Incans use potato as a staple crop, they dehydrated them and used it as a rescue food in case of crop failure. (Chapman) Potatoes were introduced to Europe in the second half of the 16th century by the Spanish. They helped to stabilize access to food.  For instance, in France, prior to the widespread adoption of potatoes, French farmers were barely able to feed the population, with at least 40 outbreaks of serious, nationwide famines between 1500 and 1800. Potatoes produced more food per acre than wheat, survived destruction of above-ground crops by soldiers during wars and was used as insurance against crop failure. By the end of the Napoleonic Wars in 1815, the potato had become a staple food in the diets of most Europeans. (Chapman)

Barley has been used as a staple in Tibetan foods in Asia for thousands of years. A hardy Tibetan variety of barley was specifically bred to grow in the high, arid Tibetan Plateau. This grain also lacks the tough outer hull more commonly seen in other varieties of barley. Ground-up, roasted Tibetan barley flour, called tsampa, is consumed in many ways as part of the Tibetan diet: made into cereal or porridge, mixed with butter and tea to make portable snacks, and mixed into wedding cakes. It is also tossed into the air at religious ceremonies. (Neilson 2019) It has been reported that the Dalai Lama still eats tsampa for breakfast. (Seal 2015)

Europeans also consumed rye, barley and oats as staple crops. These grains were made into coarse gruels or cakes often cooked on a griddle. Before the middle of the nineteenth century, such cakes would have been prepared using a sourdough starter, and allowed plenty of time to rise. In the north, dough from oats was made into “clapbread”, which were crisp and wafer-thin. (Morell, p. 147). The British upper classes used wheat for bread-making, but the lower classes ate dark coarse breads, usually made with rye and often with ground peas or other pulses mixed into the dough. (Morell, p. 147). Porridges were also made from peas. An English children’s nursery rhyme first recorded in 1760 made a game out getting children to eat their porridge (Opie 1951):

Some like it in the pot, nine days old.”

Sweet potatoes (unrelated to the white potato) grew in lowland areas all around the Caribbean at the time of the Spanish conquests.  The Spaniards also brought sweet potatoes to Europe. It is reported that King Henry VIII, son-in-law of King Ferdinand and Queen Isabella of Spain, were particularly fond of sweet potatoes.

Bananas are another major source of starch. Originally, the wild banana was a fruit with just a few centimeters in length with little flesh – an opportunistic jungle weed according to one source (Simmonds 1962). Bananas originated in South-east Asia and western Pacific regions. It was domesticated, then spread to the Philippines and other parts of Southeast Asia and the South Pacific between 8000 and 5000 BC. (Piatti-Farnell 2016) Bananas are believed to have been carried to Europe in the 10th Century A.D.  Today’s bananas are currently grown in Africa, Asia and Latin America, with approximately 85% consumed locally and 15% exported. Bananas contain >80% starch when totally green, but as the fruit ripens, the starch is converted into sugar as the characteristic banana flavor develops. Historically, green bananas have been used as a starchy flour for cooking and baking. (Morton 1987) In hunger-stricken countries, such as Haiti, many African nations as well as Jamaica, one of the main foodstuffs for survival, especially given to growing children, was starchy green bananas.

Green bananas have also been identified as a major source of resistant starch in Thailand, along with legumes such as red beans, red kidney beans, white cowpeas, yams and cassava roots.  (Moongngarm 2013).

Genetics also supports ancestral starch in traditional diets.  Chimps have two copies of the gene for salivary amylase, the enzyme that digests starches. Salivary amylase hydrolyzes the alpha bonds of starch and glycogen and begin the process of starch degradation in the mouth. A dietary shift to greater starch intake during the agronomic transition of the Neolithic period is thought to have selected for the duplications observed within the salivary amylase genes. (Poole 2019) Aboriginal peoples eating low-starch diets, such as the rain forest-dwelling BiAka and Mbuti pygmies of the Congo Basin, average 5.4 copies, while humans, worldwide, average seven copies of this gene. (Jaminet, pg 12). These genes reflect the widespread consumption of starch for likely thousands of years.

Starch has been a mainstay carbohydrate in diets for millions of years.  Our intestinal microbiome is accustomed to a steady diet of resistant starch. The source of starch varied, depending on what type of roots, fruit or plants was locally available, but starches have always been a food staple. Over the past century, our starch consumption has significantly changed due to modern food processing.  We have converted resistant starch into highly digestible starch, to the detriment of our health.

Chapman, J. The Impact of the Potato, retrieved from https://www.history-magazine.com/potato.html. Accessed 12 Aug 2019.

Liljeberg, E.H. (2002) Resistant starch content in a selection of starchy foods on the Swedish market. European Journal of Clinical Nutrition 56(6): 500-505.